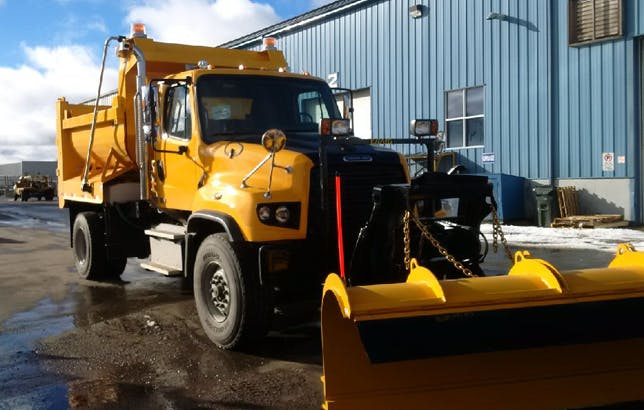 Each year, fleet managers are pressured to reduce expenses while increasing profits. The City of Saint John in New Brunswick is no exception.

The city purchases new trucks through a tendering process to get the best value for their dollars. For the winter season, the city purchased six new Freightliner® 114SD trucks to serve as snow plows through a competitive bid submitted by Universal Truck & Trailer. The dealership successfully spec’d an affordable, high-quality truck that met more than 50 pages worth of requirements, including a Cummins or Detroit® engine, and weight load limits as mandated through provincial laws.

The City of Saint John’s timing could not have been any better. Last winter, Saint John broke a 52-year snowfall record, and the 114SD quickly proved its worth.

Neither sleet nor snow can stop the 114SD

During an average winter, Saint John hauls 2,500 loads of snow out of the South End Peninsula Central Business District. This is where the majority of businesses in the city are located, along with a combination of commercial and residential areas. This past winter, Bob Russell, the fleet manager for the City of Saint John, estimates that they hauled 10,000 loads of snow out of the central business district. He said that between January and March of 2015, they hauled approximately 32,000 loads of snow city-wide, which resulted in the opening of three additional snow dumps to accommodate it all. Saint John was buried under more than 167 inches (425 cm) of snow, but city crews were up to the challenge.

Not only did the snowfall require round-the-clock tending from the city’s crew and mechanics, the weather was taxing on the equipment. Because the city is located on the Bay of Fundy, they see milder temperatures, salt spray, and heavy, slushy snow, all of which is a burden on equipment. However, those conditions did not stop the 114SD snow plows.

“From what I’ve understood the operators are happy, they’re a pretty good workhorse,” said Russell. “The amount of snow we received increased the crews’ activity, and thankfully we had dedicated crews. They all responded 24/7. Some worked 16-hour days, slept for eight hours, and came back in.”

The 114SD can handle the most demanding jobs, so it’s no surprise that it helped keep the streets of Saint John safe this past winter. In addition to being tough, it offers industry-specific features for ease of upfit and driver comfort, including standard front frame extensions, optional air intake snow shield, crossmember for wing plow support, and extreme-climate thermal cab insulation.

The snow plows were upfit by Craig Manufacturing in New Brunswick with a quick hitch system. “The plows are about as rugged as we’ve seen,” said Russell. “And for us it’s about a universal approach so we’re familiar with all the parts and they’re easy to repair and stock. We’ve had really little challenges with upfit.”

Gregory Marr of Universal Truck & Trailer credits much of his success to working closely with TEMs to streamline the upfit process.

“The biggest reason my clients like to work with Freightliner chassis is because the chassis arrives exactly as they requested it,” said Marr. “This prevents any delays in delivery during the upfit process.”

Small businesses, large organizations, and municipalities are all feeling the crunch to reduce their Real Cost of OwnershipSM (RCO), whether it’s through improved fuel mileage, lighter-weight trucks to carry larger payloads, or increased uptime through ease of maintenance and repairs. Freightliner dealers can help you spec the right truck for your needs and offer money-saving tips to lower your RCO. Find a dealer near you.